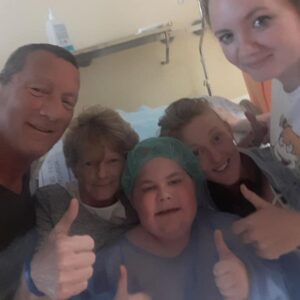 Help Aaron by following the link

My name is Carla Jane Bannister, 21 years of age, resident of Spain for the last 14 years.

This account is to raise funds for my little brother, Aaron Tyler Bannister. He’s only 11 years old and suffers from a terminal disease, without cure, called muscular dystrophy. In particular, Duchennes (DMD).

He was diagnosed in October 2010, after begging assistance for 3 years, since we noticed that something was not right when he began to crawl and walk.

He couldn’t run as fast as other children, jump as high, climb stairs as easily.

When we first complained, when he was about 2 years of age, doctors investigated and determined that he had flat feet. Something that, over the years, would prove to be an incorrect diagnosis. 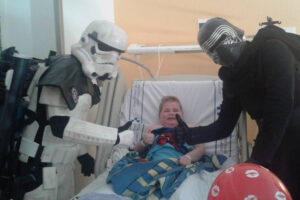 This disease is caused by the lack of dystrophin in the muscles, which causes the progressive deterioration of these, starting with the legs.

This genetic disease only affects 1 in every 3,400 children, being males the ones to suffer the symptons. Girls/women, if they carry the disease, would have a 50% chance on passing it to their newborn, if male.

Men who suffer from this disease, begin an undetermined fight, since there is no cure, from the first symptoms, these being weakness in the legs and visible “growth” in the calf muscles (this “growth” being the muscle starting to deteriorate).

Scroll Up
We use cookies on our website to give you the most relevant experience by remembering your preferences and repeat visits. By clicking “Accept All”, you consent to the use of ALL the cookies. However, you may visit "Cookie Settings" to provide a controlled consent.
Cookie SettingsAccept All
Manage consent

This website uses cookies to improve your experience while you navigate through the website. Out of these, the cookies that are categorized as necessary are stored on your browser as they are essential for the working of basic functionalities of the website. We also use third-party cookies that help us analyze and understand how you use this website. These cookies will be stored in your browser only with your consent. You also have the option to opt-out of these cookies. But opting out of some of these cookies may affect your browsing experience.
Necessary Always Enabled
Necessary cookies are absolutely essential for the website to function properly. These cookies ensure basic functionalities and security features of the website, anonymously.
Functional
Functional cookies help to perform certain functionalities like sharing the content of the website on social media platforms, collect feedbacks, and other third-party features.
Performance
Performance cookies are used to understand and analyze the key performance indexes of the website which helps in delivering a better user experience for the visitors.
Analytics
Analytical cookies are used to understand how visitors interact with the website. These cookies help provide information on metrics the number of visitors, bounce rate, traffic source, etc.
Advertisement
Advertisement cookies are used to provide visitors with relevant ads and marketing campaigns. These cookies track visitors across websites and collect information to provide customized ads.
Others
Other uncategorized cookies are those that are being analyzed and have not been classified into a category as yet.
SAVE & ACCEPT